Eurasian Blackbird (Turdus merula)
Van Hellbird is a Halloween Bird in Angry Birds Evolution that could be obtained in the hatchery at the Hellbirds Event but now can be obtained at other events.

Although his origins are a mystery, Van Hellbird is celebrated and feared by pigs and birds just the same. This overambitious, black-feathered bird strives for absolute justice, even if this requires unusually measures...

Based on Van Helsing, he is a short dark pear-shaped gray bird with a large orange beak with buck teeth, small feet of the same colour, two large eyes with blue irises, black long hair and a black tail. He has small eyebrows above the eyes.

He wears a light brown coat with a white button and a pocket, which the coat hides a part of the blue sweater he also wears.

He now wears a large top hat with a brown belt with a silver buckle, a black coat and a blue band on below the head. He has now a bit of beard and lacks the buck teeth.

As a manbat and based on the Dracula from the Van Helsing movie, Van has now fur and is white, he has some muscles, there are now sharp teeth in his beak, two large bat ears with peach skin inside, two dark spots below the eyes, which are now purple and with black spots below the irises that are orange, the hair is now hard,  the tail is now a large dark gray bat tail and he has two small bat wings on the back. He lacks eyebrows but has now claws with sharp toenails.

The bird wings are now hands and dark gray.

As a Werewolf and based on the one from the Van Helsing Movie, he has now more feathers, the coat is torn and separated like a jacket, he has now bushy eyebrows, a bunch of sharp teeth, large wolf ears, large wolf tail, the irises are now green and the hair is now bushy and messy. The claws are still there.

Casts an explosion that deals 349 damage, stunning pigs in fear for one turn.

Casts an explosion that deals 717 damage, stunning pigs in fear for one turn.

Casts a huge explosion that deals 1287 damage, and steals health from all hit pigs for two turns.

Casts a huge explosion that deals 1287 damage, stunning pigs in fear for one turn.

Boosts the damage of Performer and Special Forces Birds by 20%.

Heals the team's HP by 5% every time a pig gets Koed! 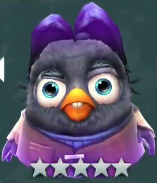 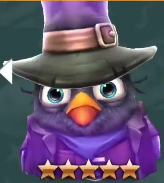 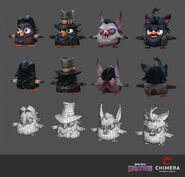