Seagull (Larus hyperboreus)
Wade is a bird in Angry Birds Evolution that can be obtained at any time in the hatchery.

Wade by name, wade by nature!

We haven't got a clue what that means... but it impresses the chicks!

He wears a white and blue striped band on his hair, a wooden necklace with a wooden classic Red medal, a red ball in the hair and a dark blue wetsuit with a lighter chest and black lines.

The goatee is now larger and with red balls, there are bronze parts on the suit, an extra necklace to the medal and two blonde feathers below the metal and he is happier.

Evolved.
Wade in Icon.png
On the old game icon 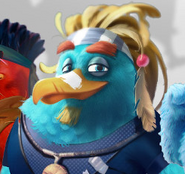