You're supposed to play with your friends to see who can get the most points out of all the levels in a week. When the week is over, the top three players with the highest scores earn

, and the next 6 levels will be released.

You cannot play levels from past weeks again most of the time, but sometimes levels are reused.

Chuck, Red, Bomb, or Matilda also compete with you in the game.

Aside from regular weekly tournaments, where levels are often repeated from past weeks, there have been a number of unique tournaments, with different settings, themes or new gameplay elements. All special tournaments have unique levels. Dates in parentheses refer to the starting dates of each tournament.

Week 16 (September 3, 2012)- Lotus F1 Team Tournament- A race car-themed tournament. For the duration of the tournament, all power-ups could be used in a level instead of the usual limit of two power-ups.

Week 24 (October 29, 2012)- Halloween Tournament 2012- Introduces Bubbles to Angry Birds Friends. All defeated pigs rise up from the ground as Zompigs and must be defeated once more. The final level features a Fat Zompig. Adds The Hunter as a limited-time power-up.

Week 26 (November 12, 2012)- Lotus F1 Team Tournament II- An Angry Birds Star Wars-themed tournament. Again, all power-ups can be used in a level for a limited time.

Weeks 29-32 (December 3-24, 2012)- Winter Tournaments 2012- Introduces snowballs that grow larger when pushed or rolled, snow cannons, and sleds. Adds Santa Bomb Bird and TNT Drop as limited-time power-ups. There are also a number of cosmetic differences- for instance, the slingshot resembles a pair of skis.

Week 39 (February 11, 2013)- Valentine's Day Tournament 2013- Reintroduces the cannons from the Winter Tournaments, which now shoot hearts instead of snow.

Weeks 69-70 (September 9-16, 2013)- Rock in Rio Tournaments- A tournament themed after the annual Rock in Rio music festival. (Takes some assets from the discontinued Green Day episode.)

Week 94 (March 3, 2014)- Wingman Tournament- A superhero-themed tournament. The Wingman can be used for free during this tournament. El Porkador appears in the last two levels.

Week 105 (May 18, 2014)- Pirate Tournament- Besides the various cosmetic changes, cannons return with another new look. The Sea Monster Pig, which resembles the Fat Pig, also appears on the last level of the tournament.

Week 108 (June 8, 2014)- Bird Cup Tournament- The first of two soccer-themed tournaments. Aside from cosmetic changes, it is noted that the Fat Pig appears (with the same strength as the Sea Monster Pig).

Week 110 (June 22, 2014)- Summer Tournament 2014- A summer-themed tournament with the background and ground textures resembling those in Surf and Turf.

Week 112 (July 6, 2014)- Bird Cup Championship- The second of two soccer-themed tournaments, with the same changes as the Bird Cup Tournament.

Week 116 (August 3, 2014)- Wingman II - Revenge of The Cyporkador- Another superhero-themed tournament featuring El Porkador (who appears in the third and sixth levels). Again, Wingman can be used for free during the tournament.

Week 120 (September 1, 2014)- Office Tournament- An office-themed tournament. Paper airplanes appear in some levels, some of them suspended in the air holding items or pigs. Hitting the airplanes cause them to fall somewhat slowly.

Week 124 (September 29, 2014)- Sneak Peak (Unlock the Flock) Tournament- Part of the Unlock the Flock event that ultimately led to the reveal of the Angry Birds Movie. By progressing through levels one, three and four, pictures were revealed that could be shared on Facebook. (Defeating all of the pigs in level six made a large crate titled "Unlock the Flock" appear, but this did not unlock a picture.)

Week 127-129 (October 20 - November 3, 2014)- Halloween Tournament 2014 (Curse of the Mummy Pig)- Instead of reprising the zombie theme in the previous Halloween tournaments, the setting is an Egyptian tomb. Like the Zompigs, however, every defeated pig is reborn as a mummy. Aside from more cosmetic changes, large blocks with hieroglyphics also appear that are indestructible and can deal massive damage to pigs and towers.

Week 131 (November 17, 2014)- Pangolins Tournament- As part of an effort with United for Wildlife to raise awareness of the threatened species. Levels have pangolins in cages that, when broken, release curled-up pangolins that function similarly to boulders.

Weeks 135-137 (December 15 - 29, 2014)- Holiday Tournament- Week 135 adds destructible ice blocks that birds, pigs and other blocks can slide on. Week 136 is Christmas-themed, with Christmas trees, presents and different costumes for the pigs. Week 137 is New Year's Day-themed, with rockets that, when hit, can be sent flying and explode on contact.

Weeks 140-141 (January 19 - 26, 2015)- NHL All Star Tournament- This tournament, taking place in a hockey stadium, has an icy ground that blocks, pigs and birds slide on. Indestructible hockey pucks can sometimes be used to score points in hard-to-reach places. Some levels feature scoreboards that function similarly to the hieroglyphic stones in the previous Halloween tournament. Finally, Chuck is replaced with Hockey Bird.

Week 146 (March 1, 2015)- Retro Games Tournament- Each level is an homage to a different video game. New items are introduced for this tournament only, including colored block tiles and pixelated icons that are worth lots of points. In order, the six video games referenced are: Tetris, Super Mario Bros., Breakout, Pac-Man, Bubble Bobble, and Space Invaders.

Week 149 (March 22, 2015)- Earth Hour Tournament- Themed around the worldwide Earth Hour movement, in which people are encouraged to turn off all lights for an hour every March 24th. As the player progresses in each level, popping pigs and destroying lightbulbs, the lit windows in the buildings that make up this tournament's playing field eventually go dark.

Week 150 (March 29, 2015)- Easter Tournament 2015- Besides the pigs donning chick costumes and the return of Easter eggs to destroy, the big thing about this sponsored tournament is the presence of Starburst candies and eggs in a new springtime location.

Week 152 (April 13, 2015)- Rocket Tournament- Introduces fireworks. Some are activated only after switches are hit.

Week 157 (May 17, 2015)- Help Nepal Tournament- In response to the devastating Nepal earthquakes of 2015, this tournament- complete with new sprites for medical supply kits and packages- was created to raise awareness of the situation. Purchases during that week's tournament were used to help victims of the earthquakes.

Week 159 (May 31, 2015)- Massive Tournament- All levels produce big scores. Some levels also feature giant, destructible wooden blocks with gems that can be destroyed, and/or giant stone blocks that cannot be destroyed (similar to the blocks in the Halloween 2014 tournament).

Week 161 (June 14, 2015)- Underwater Tournament- This underwater-themed tournament adds many new sprites and features low-gravity gameplay that affects both the birds and the level itself.

Week 163 (June 28, 2015)- Up For School Tournament- An endorsement of the UpForSchool Petition, which demanded that world leaders follow through on the promise of a good primary school education in every country by the end of 2015. New destructible objects include school-related items like apples, pencils and books. The most valuable of the new items, the globes, reward 10,000 points.

Week 182 (November 8, 2015)- Moustache Pig Tournament- There is one Foreman Pig in each level of this Movember-themed tournament. Other pigs (and even balloons) now sport moustaches as well. This tournament also introduces the Golden Moustache, which- when destroyed- causes Foreman Pig's own moustache to grow. This mechanic can be utilized to topple towers.

Weeks 207-209 (May 4- May 18, 2016) Angry Birds Movie Tournaments- A series of tournaments based on the Angry Birds Movie. Changes are mostly cosmetic, but each level has a number of eggs that, when hit, grant 5000 points before being transported to a nest elsewhere in the level.

Week 211 (June 1, 2016) Vikings Tournament- Besides the Viking theme, three runes appear throughout many of the levels. When all of the runes are hit, a summoned warhammer falls from the sky to deal great damage. Dragon Pigs similar in strength to the Sea Monster Pig or El Porkador also appear.

Week 213 (June 15, 2016) Knights of the Golden Egg Tournament- Adds a medieval theme. Some pigs shoot arrows when triggered in a certain way (similar to Cupig's arrows in the Valentine's Day 2015 tournament).

Week 215 (June 30, 2016) Pig Your Ride Tournament- All levels are car-themed, with various new sprites (some reused from Bad Piggies, like the motors).

Week 233B- 234B (November 7-14, 2016) Moustache Pig Tournament 2016- All six levels from the original tournament return, with plenty of new ones utilizing the moustache mechanic as well.

Week 236 (November 28, 2016) Amusement Pork Tournament- This amusement park-themed tournament adds many new sprites. One interesting level has a switch-activated conveyor belt that launches popcorn pieces all across the level.

Week 239-241 (December 15-29, 2016) Hogidays Tournament- This winter tournament returns to the basic Christmas theme. Various new sprites are added for the occasion, some borrowed from various Angry Birds Seasons episodes. The tournament-exclusive stocking creates loads of presents when destroyed. Week 241 changes the background to a fireworks-filled night sky for New Year's Eve, and the rockets make a return.

Week 246 (February 2, 2017) Designed By You Tournament-  A tournament  that countians levels that were fully created by the fans.

Week 256 (April 13-17, 2017) Bunny Business Tournament-  A tournament that indroduces the Fairy Dust Orbs to tournaments and countains fake eggs that can be painted. This tournament also introduced the first phase of the Design Change, changing only icons.

Week 258 (April 27-May 1, 2017) Spring Has Sprung Tournament- A colorful tournament full of flowers and springs, boing!

Week 263 (June 2-5, 2017) Nostalgia Mania: The Knights of the Golden Egg Tournament- This tournament does a comeback.

Weeks 321C-322A (July 16-19, 2018) Knights of the Golden Egg Tournament- This tournament does a comeback  with an Octotournament and new levels.

Week 327A (August 23, 2018) Tiger Tournament 2018-  The tournament  that comemmorates Tiger Day does a comeback with an Octotournament and new levels.

A past Tournament level.

A past level with someone using Sling Scope.

A past level in action.

A former level of the week.

Another Former level of the week

Fund of a common weekly tournament. 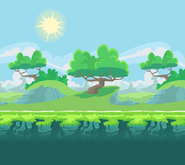 Fund of the weekly tournament of 11.05.2015 (and possibly the Mobile).
Add a photo to this gallery

Retrieved from "https://angrybirds.fandom.com/wiki/Weekly_Tournament?oldid=266851"
Community content is available under CC-BY-SA unless otherwise noted.