Male
Will is a Purple Hatchling who has appeared in The Angry Birds Movie, Angry Birds Blues, and Angry Birds MakerSpace. He is one of the main Hatchlings in the franchise.

He is a Hatchling that is a friend of Jay, Jake, and Jim. He is also seen with the other Hatchlings.

Will is a Diademed Tanager Hatchling. He has red ruby feathers hair and tail, orange beak, purple feet instead of orange, small wings, and brown irises. Sometimes, his beak is also purple.

He debuted in this movie as a minor character.

He appeared in several episodes in the series such as Mighty Delivery which was his debut episode.

He appears in several episodes in the series as a minor character.

He appeared in several episodes in the series such as Will's Secret Formula which was his debut episode. 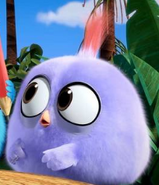 Will eating a chocolate bunny