Dark blue mask with a big yellow W printed on it

Super strength
Wingman is a transformation that appears in the Angry Birds series. It is a superhero-like state of Terence, achieved through unknown means.

As Wingman, Terence has the same physical features as his normal self. A large, round bird, he is covered with crimson feathers, small, darker circles in certain parts of his body, and peach feathers on his belly. Terence now wears a dark blue mask that covers most of his head. Said mask also has a large, yellow W on it.

In Angry Birds Space, Wingman's design was slightly altered. He no longer has pupils on his eyes, and his feathers are lime-colored.

Wingman makes his first appearance as a power-up in Angry Birds Friends. He can be obtained by buying him at the shop, by getting rewards, or by watching an ad. In addition, there is also a chance that the player will get a free Wingman to use in the Star Cup. The tournaments Wingman vs. El Porkador and WINGMAN II: Revenge of Cyporkador allowed the player to use Wingman for free as well.

When using Wingman in gameplay, a short cutscene of him flying in an orange background will be shown before taking the player back to the normal gameplay, now with the bird that was on the slingshot replaced by Wingman. However, can only be used a limited amount of times in the levels. His strength is comparable to that by Terence, though he can be made much stronger with the Power Potion, the King Sling, or by using a special slingshot. When he is launched, he will have a golden trail behind him, and colliding with objects will show onomatopoeia-like words with the texts POW, SCRATCH, OOF, or AARGH.

The costs of Wingman at the shop are the following:

In Angry Birds Space, Wingman appears as a powerup introduced along with the Mirror World. Wingman can be obtained by buying him at the shop, by watching an ad, or by completing an episode.

When using Wingman in gameplay, the current bird on the slingshot will be replaced by him. Wingman's strength is comparable to that of Terence. When tapping onto the screen when he is launched, Wingman will have a gravitational field surrounding him, allowing him to attract nearby objects and Space Pigs. However, this ability will last for a limited time.

The costs of Wingman at the shop are the follows:

In Angry Birds Seasons, Wingman only appears as a custome wore by Terence in the second level of Pig Days.

In Angry Birds Reloaded, Wingman returns as a power-up, with the same features as in Angry Birds Friends. His costs at the shop are the follows: 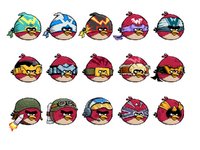 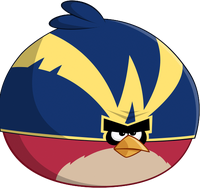 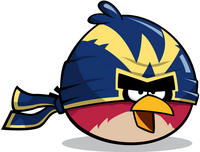