The player has to engage 2 Snow Pigs and 2 Ice Pigmies..

The player has to engage 2 Tiny Snow Pigs, 2 Snow Pigs, and 1 Ice Shaman..

Warning #2: Be careful! The Frost Hog can provide poison to you and Ice Shaman can steals your received healing! To cleanse those harmful effects, after Frost Hog or Ice Shaman attack, use The Blues' secondary skill immediately on all birds.

Choose Red in Samurai and Matilda in Druid and The Blues in Tricksters. In every waves, attack every turn with The Blues and Red, then, heal with Matilda if the birds' health is not full, otherwise, attack with her. When, the Rage Chili is full, do as what we said at the "Warning #1". Also, don't forget to use The Blues' secondary skill correctly as we have shown at "Warning #2" and use Red's secondary skill every time when the Frost Hog is about to attack or when there are only two birds left. Repeat this over and over until you win or lose.

The Frost Hog and Ice Shaman are the real problems, so take them down. 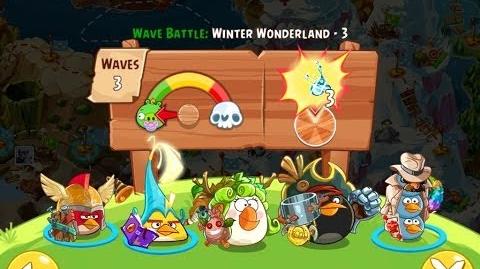 Retrieved from "https://angrybirds.fandom.com/wiki/Winter_Wonderland_-_3?oldid=220306"
Community content is available under CC-BY-SA unless otherwise noted.