Winter Wonderland - 4 is the fourth level of Winter Wonderland in Angry Birds Epic. It is a Normal stage. When this level is finished, the player may spin for 3 Ice Chilis. Frostpig is introduced here. He is a wizard pig who can do a multi-attack on any of the player's birds. He can also prevent the use of the Rage Chili for 3 turns although he needs to charge it for 2 turns.

The player has to engage 2 Ice Pigmies and 1 Frostpig. Each enemy's stats are shown below.

Choose Matilda in Druid, Bomb in Cannoneer and The Blues and Rogues. Heal with Matilda if the birds' healths are not full and if they're full, attack with them. Then attack with the others. Use the Rage Chili on Matilda when it is full. Repeat this over until you win or either lose.

Ice Pig can block the Rage Ability of his target, so watch out! 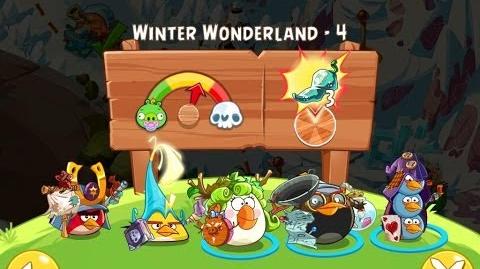 Retrieved from "https://angrybirds.fandom.com/wiki/Winter_Wonderland_-_4?oldid=268805"
Community content is available under CC-BY-SA unless otherwise noted.