The Wreck the Halls Short Movie is an Angry Birds short aired on the Nicktoons station as part of Nickelodeon Extra in 2011. 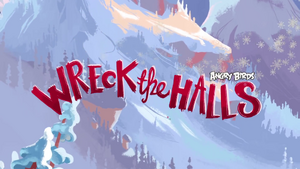 The Short begins with the pigs sledding down a mountain after stealing the birds' Christmas Presents. When the The Blues were looking that their presents were stolen, they became upset and sad. The upset Mountain Bluebirds then began to whimper and sniffle, looking like they're about to cry, except for Jay, who is already crying and sobbing loudly because of the Birds' presents being stolen. This enrages Bomb so much that he explodes. The pigs stop the sleigh when they hear the explosion far away on a hill. They then continue moving happily as they thought that it was nothing important. Jay cried even louder.

Red and Bomb then ski down the hill chasing the pigs. Bomb knocks into many obstacles, including a snow mound that sends him flying through the air and landing right behind the pig's sleigh. He manages to knock the sack of presents off of the sleigh, but there is still one present left. Seeing this, Bomb tries to pull it off by the ribbon.

The sleigh approaches the pigs' ice fortress located on the edge of a large cliff. The Corporal Pigs open the door to let the pigs in, but then, they as well as the pigs on the sleigh see Bomb holding on. Bomb's fuse ignites and the pig's sleigh enters the fortress with him still hanging on to the last present, and Red arrives just in time to see Bomb blow up the fortress.

Bomb then appears out of the smoke with the present and The Blues arrive with the sack of presents. The Blues, Red, and Bomb became very happy and started to have happy laughter together. Then all of a sudden, the cliff holding the Pigs' fortress collapses. Out of The Christmas Spirit and encouraged by Red, Bomb drops the present he had been hanging onto down the cliff for the Pigs, and when the present fell on a ribbon, 3 stars were presented. At the end of the short (YouTube only), the Angry Birds Peace Song was sung. 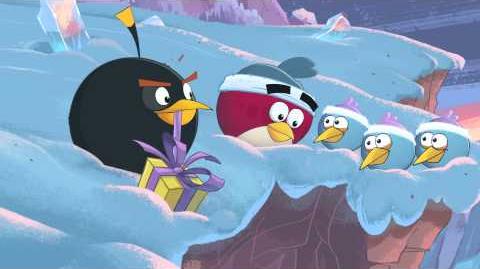 A Blue crying for the gifts 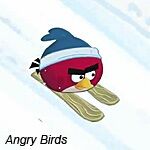 Red sledding after the gifts.

Wreck The Halls is a co-operation of Nicktoons and Rovio.

A screenshot from Wreck The Halls: A Nicktoons / Rovio short film. 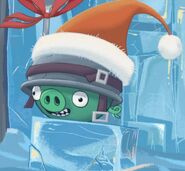 Sticker 140 from the EMAX sticker album.