Angry Birds Wiki
Register
Don't have an account?
Sign In
Advertisement
in: Year of the Dragon, Released Episodes of 2012, Season 2012,
and 2 more
English

Year of the Dragon (Traditional Chinese: 龍的一年, Simplfied Chinese: 龙的一年, Pinyin: Lóng de yī nián) is the tenth episode of Angry Birds Seasons, celebrating Chinese New Year, announced in Rovio's YouTube video "Happy New Year from the Angry Birds", seen below. Rovio's teaser trailer states that the update happened January 20, but it landed on the 19th in most areas of the world. In the trailer, the birds are puppets being operated by the pigs below.

This episode commemorates the fifth Chinese Zodiac, the Dragon (龙 (Simp. Chinese) or 龍 (Trad. Chinese)) (Pinyin: Lóng) and is the second Chinese-specific episode, the first being Moon Festival.

If you buy the Anger Management DLC Pack for Angry Birds Trilogy for the PS3 and Xbox 360, you can play Year of the Dragon & use Mighty Dragon in Trilogy.

Bubbles appears for the third consecutive episode of Seasons and its fourth appearance overall (the Orange Bird also appears in Birdday Party in the original Angry Birds game). It also debuts the Orange Bird's first appearance in a Chinese holiday-based episode in Seasons.

An animated short for this episode debuted on January 21, 2012. It was the second to premiere first on television (on Nickelodeon) rather than online. The Blues are also the only birds to appear in the animation.

It is the fourth episode to have a comic book, with the first being Moon Festival, the second being Halloween, the third being the Christmas Special, the fifth being Angry Birds Space, and the sixth and latest one being the two paged Bad Piggies comic.

A Year of the Dragon Comic strip was released with a story based on the animation of the same name.

DRAGON ATTACK
To celebrate Chinese New Year, King Pig commissioned a new puppet theatre. The first play portrayed Smooth Cheeks as the hero and the Flock as a bunch of yellow-bellied cowards. Red wasn't having that and sent in something that looked like a dragon. At first the idiotic King thought my scaly buddy was nothing more than a special effect. Ha! He was soon squealing in fear . . .

Year of the Dragon Short Movie

Year of the Dragon World 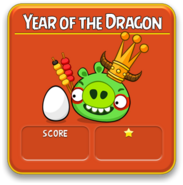 Old Episode Icon of Year Of The Dragon (Android and IOS)

The Firework you get after completing the level

The Firework you get after 3-staring the episode