The Year of the Dragon Short Movie is an Angry Birds short aired on the Nicktoons station as part of Nickelodeon Extra in 2011.

The short begins as the Pigs (including the King Pig) gather at an outdoor puppet theater. The Blue Birds secretly watch behind some bushes.

In the puppet show, it shows puppets of Chuck, Matilda, and The Blues preparing for Chinese New Year, when a pig dragon puppet comes to steal the eggs. It scares the birds, but the Matilda puppet pulls out a pot of Mighty Dragon stickers, which scares the pig dragon. The King Pig, seeing this, tries to blow the stickers away, but he couldn't, so Corporal Pig helps and succeeds, confusing the pig puppeteers.

The King Pig makes them end the play with the pig dragon puppet stealing the eggs and running away. This angers The Blues, and they slingshot a gold koi fish to the pigs, summoning the Mighty Dragon, which comes down on the entire theater crowd. The puppeteers (who have not been hit), not knowing what they should do, just hold up the credits. 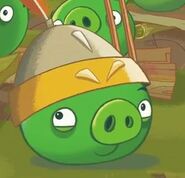 Corporal Pig in this short.
Add a photo to this gallery

Retrieved from "https://angrybirds.fandom.com/wiki/Year_of_the_Dragon_(short_movie)?oldid=238248"
Community content is available under CC-BY-SA unless otherwise noted.