Naboo Invasion, Escape to Tatooine, Battle of Naboo, Rise of the Clones

Male
Yoda (born 896 BBY on his homeworld; died 4 ABY on Dagobah) is a character that appears in the first game but is also a primary character in the second game. He is not portrayed by any bird, although he shares a resemblance to a wise owl and has the shape of an egg. His ability is to ricochet off the structures, bouncing off them. He can bounce several times with his light saber, rather than once.

He is an egg-shaped green bird with a light belly, yellow small curved beak with markings, large almost closed eyes with light green irises, long ears with light interiors and ripples on his forehead. His body seems to not have feathers.

He wears a brown jedi coat and is often seen with a wooden walker stick.

He has a different more cartoonish and Toons design, he is a different tint of olive green and he wears a beige coat with brown clothes underneath.

He appears in every Path of the Jedi level but isn't playable, he is only an assisting character. Sometimes he is controlling a Darth Vader doll with the force and holding objects in the air.

He is now fully playable and unlocked in level B2-11 of Naboo Invasion.

His ability is functioned when the player taps any place on the screen, he will then activate his lightsaber and start spinning for a short period of type, ricocheting when he hits a hard part. He can destroy wood and glass very well.

He can also be brought in the shop for a determined number of uses or infinite.

He is a respected Jedi master and one of the wisest beings in the galaxy. However, sometimes this green-tinted master can act a little absent-mindedly. Only Yoda knows where The Egg is hidden. He also wants to tell Red Skywalker about the secret but does not think he is ready.

He wears the same robes all the time. When it comes to combat, Yoda is very skillful with a lightsaber. He uses the full might of the force to outwit his opponents. Yoda proves to be a tough teacher by training Red Skywalker. His adopted planet is Dagobah and his special skills are Wisdom and Lightsaber. His ally is Red Skywalker, even though Obi-Wan and Quail-Gon were also meaningful.

On the Naboo Invasion episode icon

Ghost of Yoda from the final Cutscene 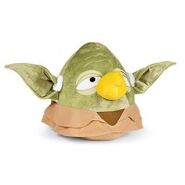 Master Yoda in the cinema