Zeta (Originally known as Zelda in concept art)[1] is a purple eagle who serves as the main antagonist of The Angry Birds Movie 2, who has redeemed herself, voiced by Leslie Jones. She is the ruler of Eagle Island who plans on destroying both Bird Island and Piggy Island so she can claim them and rebuild them as her paradise. Zeta also appears in Angry Birds 2, Angry Birds POP!, Angry Birds Blast! and Angry Birds Friends as her game appearances.

Zeta is a tall purple anthropomorphic Philippine Eagle with green eyes, black eyelashes, and a curved light purple beak with three sharp teeth (two on the left side of the beak, and one on the opposite side) sticking out of it. As was shown in the memoirs of the Mighty Eagle, in his youth Zeta wore braces and at that time her teeth were the same as those of the eagles. Her long body is mostly white in front and purple in back, and on the end of it, there are a lot of white and purple feathers above two legs with claws of the same color of the beak. She also has feathers that resemble a dress.

Zeta is the leader of Eagle island, but it is not known exactly how she became one. She is very demanding of her subordinates: for example, she ordered Glenn to speed up the process of eliminating mistakes, and because of mistakes can send them to the torture chamber, which happened to Steve and Glenn himself.

Probably, Zeta has a high level of intelligence. According to Mighty Eagle, she was "the best student"; she also tells Glenn how to implement her idea to improve the Ice Balls.

The nature of Zeta is very cruel as she was preparing to bombard the neighboring Islands, using snow ice balls and ice balls filled with lava. However, Zeta was wanting the inhabitants of those Islands to decide to evacuate, so, they won't die. In response to her actions, Zeta responds to the captive Red and Silver that she has an "ice fragment instead of a heart". In the last moments, Zeta's personality sharply converts for the better.

Despite her former evil personality, yet Zeta tried to give love to her pet Baby, not noticing his problem to the adaptability to the local climate, and her daughter Debbie, with it being at the level of friendly relations, but also very worried about her fate after the explosion of the base.

In the 90's, Mighty Eagle and Zeta met each other in high school at Eagle Island, and they both started dating. They enjoyed each other's company until one day, Zeta proposed to him. Mighty Eagle, was not ready for the next step. So, he fled and left her at the altar in cowardice.

Zeta then started to somehow managed to have amassed resources to construct a base there that's more technologically advanced than that of the Birds who lived at Bird Village. Despite the amenities that it promises, Zeta expressed frustration with the frozen environment and the never-ending problem of seals stealing her food and begins charting plans for conquest, striking nearby Bird Island with an ice ball cannon constructed at the center of the island.

Her plans of conquest were transforming Bird Island and Piggy Island into her resort islands, full of fun things and summer fun.

Eventually, Mighty Eagle arrives to make amends to Zeta, but she quarrels with him, revealing his name as Ethan and that he made her give birth to a hatchling he was unaware of named Debbie. While Zeta is distracted, Silver tells Chuck to tie up the weapon using a Super String, which catches and decelerates the lava balls when Zeta fires them. As the rope breaks, Zoe, Vi-Vi and Sam-Sam and the 3 piglets traveling above Eagle Island help grasp it. The lava balls slide back into the weapon, destroying the base.

Everyone escapes the exploding base, just as Zeta notices Debbie missing. Seeing her ice shoes under debris, Zeta believes her to be dead and begins to regret her actions just as Mighty Eagle appears under the debris, revealing that he protected Debbie from being crushed by a metal plate. After witnessing Mighty Eagle's heroic act, Zeta decides to settle her differences with him while showing gratitude and marries Mighty eagle while Red performs their marriage. After the marriage, Zeta joined the others in dancing and even asks Debbie, who is about to drink punch, to join the dance.

In Angry Birds 2, Zeta appears as a boss in The Angry Birds Movie 2 Event, where she replaces all of the boss pigs (if connected to Wi-Fi.). She has new sounds and expressions, along with a Toons styled design. Interestingly, the regular pig enemies still appear as enemies in the event, even though the pigs are against Zeta in the movie. She later reappears on 8 December 2021 and will last until the end of the year.

Zeta appears in Angry Birds POP! with a new Toons design, different from Angry Birds 2's design. She is a playable character in which she has the Freeze Pop, which freezes a line of bubbles upon contact. She was first introduced in the movie's event that also happened during the Zeta's Lair event, which  replaced King Pig's castle, with the same gameplay of beating all five levels with out losing a life.

Zeta appears in a Treasure Hunt Excavation image and gave rewards to the player on the Monday before the launch. She uses the exact same design as in Angry Birds POP!

Zeta appears in the Operation: Eagle Island Tournament as a boss. She has a new appearance based more on her movie design, different from the other designs. She is a hard to defeat boss like the other bosses, but she doesn't need to be defeated in order to complete the level, she appears in all of the levels, often with Baby,  seals, piranas and Guard pigs. She screams when defeated, her voice and behavior are similar to Gale. She always stays still, like the newer bosses that use a single sprite.

Zeta appears in the The Angry Birds Movie 2 Event as a Photo Avatar. She has a new appearance based more on her movie design, different from the other designs.

Zeta appears in Angry Birds Transformers as Nightbird and Slipstream. She uses her Toons design as a 3D model.

Nightbird like Zeta is misunderstood. Nightbird was created to represent the advancements in human technology. However, she was corrupted by the Deceptihogs and was forced to betray the Autobirds!

When Nightbird was returned to Doctor Fujiyama, she was placed in cold storage which Zeta can relate to as ruler of a frozen wasteland known as Eagle Island.

Over the years she has learned to harness the power of ice and can now use the pigs own towers against them! [2]

Nightbird in the game plays somewhat similarly to Nautica, where she launches a series of large Ice Blocks in an arc at her targets, which explode with incredible smashing power, obliterating block towers with ease. However, despite their effects on the local (shoddy) construction, they don't do a whole lot to Walking Mortar Towers without augmentation.

Who is Slipstream? Nobody knows...A solider? A spy? Whatever she's up to, she certainly knows how to keep a poker-face. She is as deadly as she is beautiful. Ice-cold and lightning-fast she can be a reliable ally... If you're certain she's on your side! Just, whatever you do, don't mention Windblade...

Some people believe she is a clone of Starscream but her true origin is a mystery. One thing's for sure, you do not want to get in this bird's way. As the first-ever female seeker, she knows how to stick up for herself! Her strategic mind and quick wit put her a cut above the rest!

Her weapon is cold and calculated, firing multiple projectiles that all home in to the same target from different angles. Some say she even hums "Let it go" as she rains destruction upon her foes! [3]

Slipstream’s weapon is similar to Nightbird's, launching ice blocks, but has quite a different deployment. It starts launching them at a random angle, but once properly upgraded, it launches four blocks at once at different angles, all converging on the target with hefty explosive force. Once the smashing happens, ice blocks then rocket sideways from the impact zone. This weapon also has an infinite clip and pretty quick rapid-fire, making up for the individual blocks' (relatively) lower destructive power. 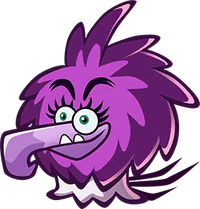 Zeta appears in the Eagle Island part of Angry Birds Reloaded as a boss. She has the same design as in Angry Birds Friends. She is a hard to defeat boss like the other bosses, but she doesn't need to be defeated in order to complete the level, She screams when defeated, her voice and behavior are similar to Gale. Unlike Angry Birds Friends, she has animations in this game.