Zoe is a hatchling who won't leave the hatchlings alone for most of the time when she is around them that appears in several instances. She is voiced by Brooklynn Prince in The Angry Birds Movie 2.

Zoe has a round bubblish type body with wings and legs and with 2 feathers on top of her head, she has a face with light pinkish cheeks.

Zoe's relationship with the Blues is that she will never leave them alone.

The Eggs (The Angry Birds Movie 2) 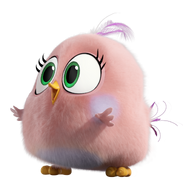